Beyond the Glacier, a short film over the water in Central Asia 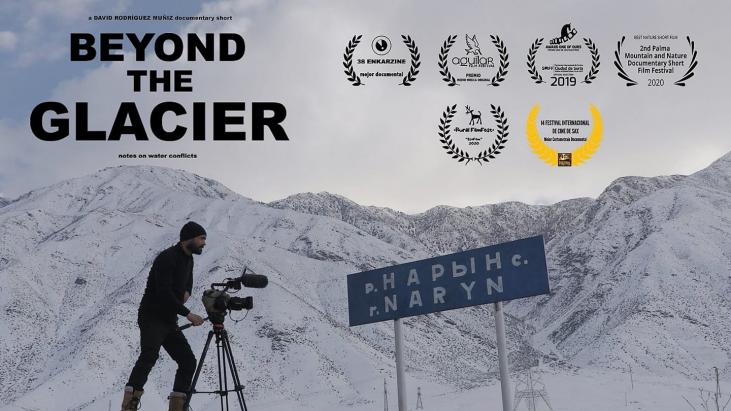 Conflicts over water in Central Asia are at the heart of the short film Beyond the Glacier, directed by David Rodríguez Muñiz in 2019. An interesting documentary that takes the form of a journey, from the glaciers of Kyrgyzstan to the sea of Kyrgyzstan. Aral.

Beyond the Glacier is a short film by Spanish director David Rodríguez Muñiz. It follows the current of Central Asia, from the glaciers of Kyrgyzstan to the Aral Sea.

In this 20-minute documentary, David Rodríguez Muñiz opens a window on the issue of water in the region, the scarcity of which is at the root of intertwined environmental, socio-economic and political problems.

The distribution of water in the region is the starting point of the short film: the reserves are mainly held by Tajikistan and Kyrgyzstan, in the glaciers of Tian Chan. These glaciers feed the two largest rivers in Central Asia: the Syr Daria and the Amou Daria. They flow into the Aral Sea and are its main tributaries.

Kazakhstan, Turkmenistan and Uzbekistan are located downstream of rivers and are therefore very poor in water. Their supply depends on these rivers, which allow the irrigation of their crops, especially cotton. By dividing up the territories, the fall of the USSR in 1991 created an imbalance causing tensions around water.

In 30 years, more than 2,000 glaciers have disappeared in Kyrgyzstan. In question: global warming, but also the extraction of gold which rejects dust and induces high temperatures. The disappearance of glaciers threatens the drying up rivers, which would induce the desertification of vast territories and make it impossible to fight against the disappearance of the Aral Sea.

All Central Asian populations whose lives revolve around water and fishing are and will be impacted. Beyond the Glacier introduces these issues with a poetic and human perspective.

To better understand this project and how it was implemented, Novastan interviewed its director David Rodríguez Muñiz. Also screenwriter, editor and director of photography, his previous short film Refugees was selected in several festivals and won seven awards.

Why did you choose to address the issues surrounding water in this region?

David Rodríguez Muñiz: Growing up in a family of sailors, I have always been interested in water and man's relationship with it (seas, rivers, lakes ...).

When I see the problems we face - the lack of clean water, the chemical contamination of aquifers, the overuse of seas or the drying up of lakes and rivers, I feel helpless. I can't understand why we destroy what keeps us alive, and how we can have such a low interest in our future and the conservation of our living space.

How and around what did you build the documentary? What were your guiding principles and your goal?

Beyond the Glacier is a journey. Its narrative line follows the course of my own trip to Central Asia, and this is how I wanted to portray it. It begins in the glaciers of the Tian Shan mountains of Kyrgyzstan, where the Syr Darya River originates. We follow its path, during which appear its populations, its conflicts, its orography, to the mouth of the Aral Sea. The water reaches its destination there, exhausted from having passed through mines and dams.

I wanted to talk about conflicts around water, to reflect the relationship between man and his natural environment. My ambition was to represent the consequences of our water management around the world, and raise awareness about our future and that of other species.

I also wanted to highlight the difference between exploitation and survival, which is expressed in the contrast between the Kumtor gold mine (in Kyrgyzstan, editor's note) and the ice fishermen. In the mine, water in the form of ice is a wall to be demolished, a prison that houses the gold to be extracted. On the contrary, for ice fishermen, water is their environment, from which they draw their food and on which they can live.

In other words, for some, water is a constraint, an obstacle, while it is a means of subsistence for others.

How did you go about filming, and in particular to get in touch with the people interviewed in the documentary?

I worked with my partner Alex Galan, an experienced guide specializing in cold regions. He took care of the road layout and the filming plan.

In Kyrgyzstan, we received help from Nomad's Land, a mountain tourism company based in Bishkek (the capital). They provided us with information on the ice fishermen, and allowed us to obtain permission to shoot at the Kumtor mine.

To get to the Aral Sea, we used the TransAral, in which we were alone, but still managed to communicate with the fishermen. It was not easy either: the language and the very low temperatures complicated the shooting conditions. Filming at almost - 27 degrees is almost an odyssey!

For now, Beyond the Glacier is screened at international festivals, such as the International Festival of Audiovisual Documentary Programs in Biarritz (FIPADOC) or the Ethnocineca in Vienna, during which it has won several awards. It will soon be distributed and available on sales platforms.

Author of the article

Novastan is the only media in French and German specializing in Central Asia. Entirely associative, it works thanks to your participation. We are independent and to stay that way, we need you! You can support us from 2 euros per month (66% tax-free), or by becoming an active member here.

Link to the original article  : https://novastan.org/fr/kirghizstan/beyond-the-glacier-un-court-metrage-au-fil-de-leau-en-asie-centrale/